The Charon system is a star system made up of five planets orbiting a orange dwarf and a four jump points.[1][2][3]

Astrophysicists hypothesize that a collision knocked this small terrestrial planet into a decaying orbit slowly to be consumed by its star.

Thanks to a rolling atmosphere of carbon monoxide, the surface temperature of Charon II are so extreme that all attempts to terraform have failed.

Terraformed by the dawn of the 26th Century, this temperate planet is home to the Phyi tower, considered one of the masterworks of Supermodernist architecture. The planet is currently locked in a bitter civil war between the states of Dellin and Acheron. The nonprofit-organization Empire's Overlooked has requested aid from haulers for the locals, since they have a hard time making money outside of weapons manufacturing, since most big companies have elected to avoid the troubled planet for fear of loosing ships. This is an actual problem, since tensions with the Vanduul have drawn UEE security away from the system, so there is little that can enforce safe travel for traders. Therefore, only skilled pilots are encouraged to help in this matter

A large gas giant on the far side of the Gedanisho asteroid belt, Charon is a swirrling ball of methane and ammonia. This vast and cold planet inspired the name of the system.

A small world drifting on the fringes of the system. Surveyors never found anything on scans that would justify landing there. 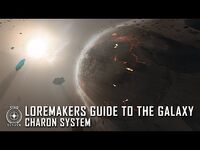