Cathcart is widely recognized as a ‘pirate system,’ and its reputation in the UEE expends little treasure trying to downplay. At heart, Cathcart is a galactic junkyard with no natural planets and no particular redeeming qualities. It’s been humanity’s prime dumping ground for radioactive debris, failed starship hulls and out-of-date space technology for generations. The only enforced rule: leave the route between jump-points clear at all time.

The inhabitants of Cathcart have constructed makeshift environments by lashing together wrecked ships, orbital platforms and anything else that can be re-pressurized. It’s an interesting environment that has spawned a truly unique subculture… but the huge population of pirates, smugglers, mercenaries and outright killers means that anthropologists won’t be documenting it any time soon.

Cathcart’s largest “world” is called Spider, a sprawling mass of abandoned UEE warships spiraling in ever-increasing mated tendrils around an ancient colony ship’s massive hull. Visitors are encouraged to keep their suits on during their stay, as the shoddy construction of the inhabited areas often gives out. Still, it’s a great place to pick up a bargain if you aren’t picky about what century your ship upgrades came from.[1][2]

The system was officially discoverd in 2438 by Adelaide Loris, though her status as a wanted fugitive at the time has led to speculation that she might have discovered the system at an earlier time and used it as a hideout until she decided to get her reward for handing the jumppoint coordinates to the UEE. Ironically, she named the system after Marshall Cathcart of the UEE Military who had been in pursuit of her for quite some time. Ultimately though, the Marshall got the better off her when he shot her in the year 2464 after Loris had returned to her life as a criminal.

In the years following its discovery, explorers swarmed the system in search for more jumppoints. When one of them, Vernon Tar, shot another ship in fear of them scanning down his area of the system, it turned out to be a Banu ship, which makes Cathcart the system where first contact between mankind and the Banu took place.

Travel Warning: Travelers to Spider can access different docking ports with different passwords. Note that these expire quickly and that using an incorrect password can flag you as hostile!

A man-made structure built from a half-finished habitable platform and countless ship hulls. As a center of pirate activity, various gangs use it as their base of operations and frequently fight for control of certain sectors. Spider is also home to an extensive black market and every form of illegal activity imaginable. 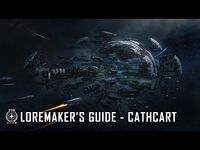