. It only differs in the paintwork compared to the standard Caterpillar and is otherwise identically.

The Caterpillar Pirate Edition is fitted with four ship weapon hardpoints and two manned turrets and two tractor beams of which one is located on the command module. The cargo deck consists of five modules separated by airlocks, four in the center with doors on port and starboard side and one module in the front, all cargo bay doors also function as a lift.

Four identically cargo modules, each with a capacity of 121 SCU and cargo bay doors on port and starboard side, the doors also function as ifts. The fifth module has a capacity of 80 SCU, one front facing cargo door and houses the forward manned turret.

A manned turret is located topside in the front and another on the underside in the back behind the cargo lift, both turrets are equipped with twin size 4 M6A Cannon laser cannons. The command pod is outfitted with two M5A Cannons and two M4A Cannons installed on size 3 gimbals.

The Pirate Caterpillar (Top down view)

A sketch of the Caterpillar with a semetric shape 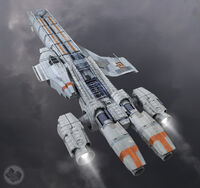 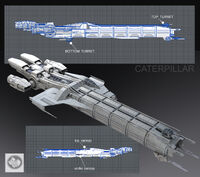 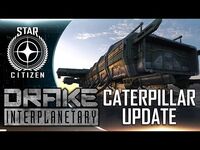