The Castra system is a star system consisting of a blue white dwarf with two planets and has five jump points.

Discovered in 2544, only 14 years after our first encounter with the Xi'an Empire, Castra was terraformed for military use. As tensions with the Xi'an relaxed, so did the military’s presence in the system. Today, Castra is primarily a trading hub, though certain areas have stayed under military control and ready for action at a moment’s notice.

Castra is a simple system containing two planets orbiting a stunning blue-white star. It was discovered by UPE military pathfinders probing the Perry Line for undiscovered jump points. After the initial exploration, early reports noted the system as “unremarkable” from an astronomical perspective, yet the military brass immediately grasped its strategic importance as a staging post for the brewing Xi'an conflict. The system was named Castra, after the ancient Roman term for land used by the military as a defensive position, and terraforming of its second planet began immediately.

Decades later, when a jump point from Castra into Xi'an territory was discovered, the system was thrust into the front lines of the conflict. As government funding flooded the system to improve its defensive fortifications and military infrastructure, it quickly changed from a mere staging post into a focal point of the Xi'an cold war. A large orbital platform was even built to support capital ships and long-range bombers, which were ever ready to attack Xi'an Empire space should the order be given.

When the Messer regime fell, the UEE tried to ease tensions with the Xi'an. In 2789, in a show of good faith, the UEE reduced their military footprint and, for the first time after two centuries of strict control, permitted the public to move into the system. The decision was, and still is for some, a controversial one. A hawkish minority of military bureaucrats and political elites believe the system best serves the Empire as a dedicated (and solitary) military outpost.

Upon Castra’s conversion, businesses arrived in droves to take advantage of the system’s exceptional infrastructure and affordable real estate. At this point, that makes Castra a prime destination for haulers looking to offload raw materials and leave with goods. Recently, Castra’s government has pushed to increase tourism to the system in an attempt to diversify their industries. 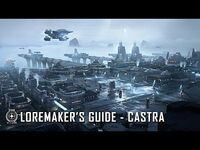