The Cano system is a single star system consisting of a yellow dwarf with four planets and has two jump points. The system is protected under the Fair Chance Act after life was discovered on Carteyna, The already ongoing terraforming process was halted and the human population that was allowed to remain on the planet was ordered to live in a restricted zone.[1]

A large gas giant composed of multiple bands of reds and browns. Surface scans indicate that the surface suffers from massive storms, some as large as a thousand kilometers in diameter. 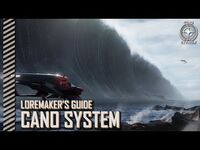