The Banshee system is a single star system with four planets controlled by the United Empire of Earth.

The iron core of this terrestrial planet has been heavily radiated. Lorona

A network of underground settlements were built beneath the barren planets surface to mine Loronas abundant mineral resources while avoiding the harsh radiation from the system's pulsar. Massive magnetic coils on the surface harvest energy from the star to power the cities and mining operations. Banshee IV

An ice giant orbiting a great distance from the systems heart. 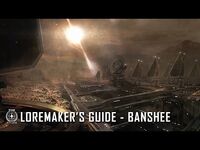