Baker is a binary system consisting of two K-type main sequence stars surrounded by a relatively desolate collection of planets that range from completely uninhabitable to barely habitable. A Covalex shipping hub and a largely automated mining outpost are the sole bastions of civilization in the region. As usual, that’s only half of the story — the Baker system is also home to the “Able Baker Challenge,” arguably underground racing’s most dangerous event.

Baker’s claim to fame is twofold: it is one of the only binary star systems in the United Empire of Earth that is (technically) inhabited, and it lies just a single jump from the breadbasket of Terra. The first point has earned the system the attention of a large number of astrophysicists eager to study such a star setup within the confines of safe and patrolled space. The second is the reason for both the system’s high point of civilization — the shipping hub — and for its use as an underground racing arena.

Baker and the surrounding cluster were first charted in 2508, by the same expedition that first identified Terra. While Terra was reached and explored soon after the region was charted, Baker remained forgotten due to the fact that binary stars traditionally offer little of value to Humans. Even when a planet within a binary star’s green zone can be terraformed, the gravitic stress associated with passing close to (or between) two stars renders attempts at civilization a moot point.

The first successful jump transit to Baker occurred in 2676,well after Terra had become established as a major player in galactic politics. The jump point to Baker was discovered by accident in the outer reaches of the Terra System, and Baker was subsequently explored by a purely scientific expedition. Formal territorial commerce rights were awarded to the Terran government, which has quietly partitioned them out to Terra-based concerns. 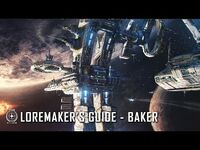