600.00 $
The 890 Jump is a capital-sized multi-crew super-yacht from Origin Jumpworks GmbH. It has a total of four decks with a ship hangar in the front and a cargo bay/vehicle hangar in the rear. The ship can be controlled from either the Main Bridge or the Battle Bridge on the Orlop Deck. It also has a Tier 2 medical facility, two 8 persons escape rafts, and a spacious interior to accommodate guests that includes a sauna, swimming pool and bar.

All 890 Jump purchased on the official website come with a 85X included.[1]

Decks
Main Deck
The Main Bridge and an observation deck are located on the main deck. Access to the master suite is possible through two concealed doors on the observation deck.

Lido Deck
The sauna and swimming pool can be found on the Lido Deck, as well as two guest rooms, two airlocks with storage lockers for EVA suits and two 8-person escape rafts in case of emergency.

Orlop Deck
All supporting facilities are located on the Orlop Deck, that include the Tier 2 medical facility, the Battle Bridge or secondary bridge, a ship hangar with two small landing pads on a shared platform that can be raised up, the vehicle hangar located in the rear (stern) to transport ground vehicles or cargo and the chef's kitchen. As well as the crew restrooms and recreation facility. The engineering station is also located in the vehicle hangar. 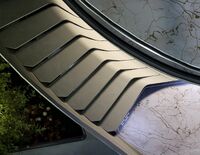 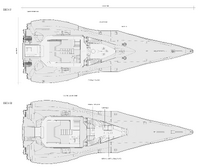 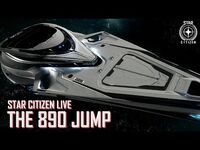 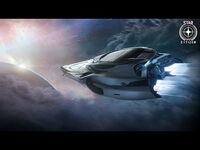