375.00 $
The 600i Touring is a large touring ship from Origin Jumpworks GmbH, it is equipped with two turrets and three weapon hardpoints and sixteen missiles. The Touring is purposefully made for travel and has four guest bed rooms on the upper deck and a lounge on the lower deck, a spiral staircase in the center connects both decks. All 600i variants feature a recreation area with a bar and a billiard table.

The interior is currently being reworked and will include docking collars amongst other features.[1]

Other
The ship is fitted with a large recreational area including a bar and a billiard table.

Cockpit of the 600 series

Billiard table in the recreation area

Master bedroom in the front with panorama window 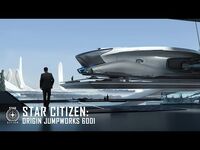 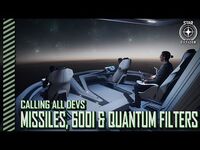 Star Citizen- Calling All Devs - Missiles, 600i and Quantum Filters 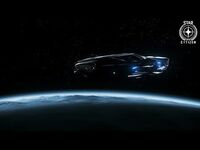