220.00 $
The 400i is an multi-crew space ship made by Origin Jumpworks. It was revealed at CitizenCon 2951 and was subsequently released in Alpha 3.15.0. The ship features two decks and can hold a land vehicle the size of a Cyclone on the cargo lift. Its armament consists of two guns, two remote turrets and four missile racks. It has a cargo lift and a dedicated vehicle lift that can hold one X1 gravlev bike. 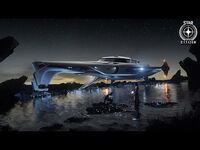